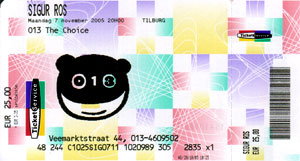 the 7th of november concert in 013 in tilburg, netherlands has been rescheduled for the 15th of november. tickets remain valid for the altered date and, if required, refunds are available from the point of purchase. the band and its management are sorry for the inconvenience caused by this alteration and worked hard to make sure they could still get to play in tilburg. the reason for this date change is due to the recording of a bbc music television show in london of which we will have more information very soon.

sigur rós will be appearing as guests on the bbc show “later with jools holland” in a few weeks. the show will be aired on november the 11th on bbc2 but will be recorded a few days prior to this and this is what caused the tilburg concert to be rescheduled. “later..” is one of britain’s most popular and influential music shows, with each show having several guests – some new and up and coming, some more established and some legendary artists. it promises to be an interesting and exciting event. more information as we get it.