In response to the European countries which are starting to take action against the closed-off DRM software by Apple called FairPlay, Steve Jobs personally responded with an open letter to the European government and the music industry titled Thoughts on Music on the website of the computer company. 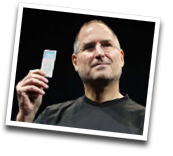 Firstly, he rejects the allegations that iPod and iTunes are strongly locked into eachother, which is simply not true; music ripped from CDs into iTunes can be perfectly played on any MP3 player in the market. And conversely, MP3s created by any encoder can be played on the iPod. So there is no lock-in between iTunes and iPod.

There is however, a lock-in between the iTunes Store and the iPod; only the iPod can play content bought in the iTunes Store. This is against European free market regulations and this is what Norway started complaining about, getting joined by many other countries including the Netherlands.

In the letter, Steve Jobs defends their strategy, enabling users to play their bought items on relatively quite a lot devices, be them all by Apple.

Apple was able to negotiate landmark usage rights at the time, which include allowing users to play their DRM protected music on up to 5 computers and on an unlimited number of iPods. […] So far we have met our commitments to the music companies to protect their music, and we have given users the most liberal usage rights available in the industry for legally downloaded music.

Remember that the Windows Media DRM is much more restrictive (and much less end-user friendly). So he is proud that Apple could negotiate the relatively free DRM with the music industry. He is however not proud of the fact that they have DRM at all and would much better liked to have completely free content in the iTunes Store. Once a hacker, always a hacker, I guess…

He foresees three scenarios for the future:

All have their problems and issues. On the third option, Jobs argues that 90% of all music sales are in fact already DRM-free, namely CDs, and asks the music business why this small percentage should be bothered with the hassle of administrating DRM on the files, while CDs can be ripped and copied just as easily.

Jobs doesn’t forget to mention that two of the four big music companies are in fact European themselves and that a third is 50% in European hands.

For Europeans, two and a half of the big four music companies are located right in their backyard. The largest, Universal, is 100% owned by Vivendi, a French company. EMI is a British company, and Sony BMG is 50% owned by Bertlesmann, a German company. Convincing them to license their music to Apple and others DRM-free will create a truly interoperable music marketplace. Apple will embrace this wholeheartedly.

In this light, it is strange that as far as I know, indie releases on iTunes are also crippled with FairPlay. Most indie artists have a much more relaxed attitude towards internet downloads. If those releases where freed from their shackles, it would certainly put the big music companies in a disadvantageous position and could put a little bit of pressure on them to loosen up.

So if Steve Jobs really meant anything of what he wrote, Apple should sit around the table with all the small labels and individuals offering their stuff on the iTunes Store, suggesting to release it free from DRM.