As a regular Rocketboom viewer, I was introduced in December to the german show Ehrensenf (ES) (anagram of Fernsehen, or television), which I since then catch daily, too. 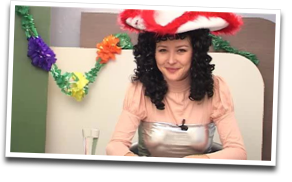 While it seems to be a copy of Rocketboom at first sight, be it in German, the show turns out to be quite fun to watch and to be different.

Both shows are produced and scripted, but most hosts of ES (they have “backups” so to say in case Katrin is on the road for 3sat or otherwise busy for the radio or her studies in technical journalism) are in my opinion better than Joanne from Rocketboom. It just looks a bit more spontaneous, less rehearsed.

ES is funny, despite the Germans are thought of to have no humour at all (which is true in many cases, especially TV shows) and even though the ES team is from Cologne (and thus not from Düsseldorf).

That being said, I think the Netherlands lack a good light news internet-tv show, but somehow I just can’t imagine it happening here. The only site I would expect to come out with such a thing would be Geenstijl… Yay, what fun would that be… (pause) NOT!