Well, so much for the practical part of the assignment, this is the version I’ll probably deliver end of this week. Added since the last pre-release are three types of isolines: Based on fixed levels, based on a fixed number of lines, based on fixed points in space. Also, it can do fullscreen, yay! 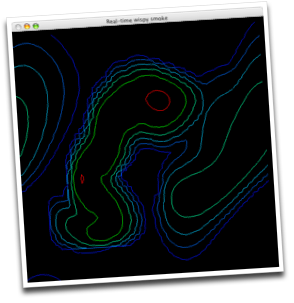 So, I hereby release version 0.1 of Fluids and name it Equinox, since that’s exactly what is going to happen tomorrow at 0:07 UTC. The days are becoming longer and longer, and starting tomorrow, they’ll be longer in Iceland than they are here again. Spring’s here!