Hooray! I actually managed today to get my [visualization]/studie/2006/03/05/visualization-1.html) compiled and running under Mac OS X. It wasn’t that hard after all, just finding the right libraries to include.

glut.h exists in fink as well as in OS X, the former binds to X11, while the latter does the OpenGL directly in Aqua. When I found out about this, it was easy. I now only need Fink for the fast fourier transform library.

Then the next challenge came, creating a real application bundle… Again not very hard, it’s just putting files in the right location and relinking the libraries.

So, now there is one little thing left, Universal Binaryness. But I can live with this result. It needs a pretty icon by the way. 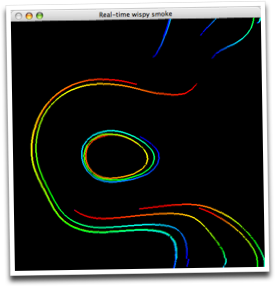 I fixed some last bits in the streamlines and found a bug that was festering along all the time without really getting noticed. The source is included in the bundle, by the way.

Last stage, implementing isolines. Then I’ll write a report about it all and then hopefully [after more than a year]/studie/2005/12/29/trimester-4.2.html) I can finish the Visualization course.